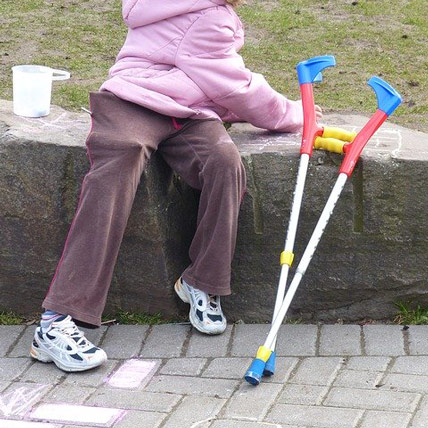 Eighty percent of all neuro-developmental problems in children are not associated with a specific diagnosis. Many of these have their origin in a traumatic birth experience which left an ongoing compromise to the central nervous system, either due to direct structural injury or compromised oxygen levels at this critical time.

A prolonged labor, or one that needed the help of forceps or vacuum extraction, may take its toll in the relationship of one bone to another, or in irritation and tension on the membranes that surround the brain and spinal cord. This affects the function of the central nervous system as it grows and may lead to developmental delays or learning disabilities. If oxygen was at a lower than ideal level surrounding the time of birth similar complications may ensue.

Osteopathic treatment helps the body to use its inherent abilities to heal by correcting structural disturbances. A few examples demonstrate the principles involved in treatment.
When the compression on the baby's head distorts the shape of the opening where the brainstem leaves the skull to become the spinal cord, the resultant pressure causes spasticity of the limbs. Gentle osteopathic treatment to help this opening return to the shape it had before the difficult birth can normalize the tone of the baby's muscles.

When the membranes which lie between the skull and brain are irritated from the compression of the skull in the birth process, one may see tremors and twitches and generalized irritability. Gentle osteopathic treatment to release this membrane restriction can result in a calm nervous system able to function more normally.

When oxygen compromise was a factor, osteopathic treatment aims to ensure good function of the respiratory center in the brain as well as free motion in the ribs and diaphragm.

We help children with autism. Refer to our autism page to learn more.

ADD (Attention Deficit Disorder) and ADHD (Attention Deficit Hyperactivity Disorder) are neurobehavioral developmental disorders primarily characterized by inattention, hyperactivity and impulsiveness. These disorders are the most commonly diagnosed psychiatric disorders in children, teenagers, and is believed to affect about 7% of children. ADHD is most common in boys than in girls and affects them two to four times more than girls.  The majority of children diagnosed with ADD / ADHD continue to have its symptoms through adulthood. It is believed that two to five percent of adults live with this condition.

Osteopathy along with nutritional and biomedical intervention has been used successfully in the treatment of this disorder (ADD)  Craniosacral osteopathy looks for slight changes in the cerebrospinal fluid, this is the fluid found around the brain and the spinal cord. This fluid when it does not have any restrictions in function, has a particular rhythm, flow, and beat. Osteopathy aims to work at releasing any blockages that may be present throughout the central nervous system and brain allowing optimum level of central nervous system function.

Using specific knowledge of the child’s developing body structure and function, biomedical changes seen in children with this condition, and psychosocial considerations, a Homeopathic & Osteopathic Physician understands that a child develops best through the interactions between their primary caregivers and other key persons, such as health professionals.

Osteopathic treatment has been shown to be an effective therapy for children with Downs Syndrome. While it is understood that Downs Syndrome is a complex biomedical disorder due to an additional 21st chromosome, affecting all systems of the body, it presents fundamentally as a disorder of the nervous system. More recently, research has suggested  that postnatal hypoxia (a reduction of oxygen to the body, after birth) as a result of upper airway obstruction, contributes to many of the developmental difficulties associated of Down Syndrome including seizures, rather than a direct impact from the additional chromosome. Osteopath and Homeopathic Physicians consider the implications of this new information to help formulate their therapy for babies and toddlers with Down Syndrome at this important time in their development.

The effect of the extra chromosome slows the growth of the baby during weeks 6-12 of pregnancy. This slowing of growth causes a shortening of the front-to-back measurement in length at the base of the skull, a region referred to medically as the cranial base. In a child with Down syndrome, two of the bones that make up the cranial base are shorter and more vertically inclined. This near vertical angle affects some of the tissues that attach to these bones and form the throat. The position of these tissues and bones shortens the airway passage from the nose and mouth. This often increases the airway resistance and likelihood of hypoxia. Children born with Downs Syndrome can also have a flatter palate within the mouth, a shorter chin, and a smaller septum that divides the nostrils within the nose. These changes can contribute to the obstruction to the upper airway. As a result, children with Downs Syndrome tend to breathe through their mouth. These differences can also contribute to feeding difficulties, and difficulty with speech.

Other physical differences that are common for children with Downs Syndrome include absent or narrowed sinuses within the bones of the face. When this happens, it leads to poor drainage of mucous. This provides an environment for middle ear and upper respiratory infections, which can further contribute to additional difficulties in breathing. The narrowing of their airway can also lead to a condition called sleep apnoea, where the walls of the throat close during sleep and reduce the oxygen supply. This lowers the amount of oxygen within the bloodstream. It is thought that when the body does not receive enough oxygen over a sustained period of time, altered development can occur to the nerves within the brain that affect behaviour. This may be why these children can experience learning difficulties, hyperactivity and/or aggression.

While it is unlikely that postnatal hypoxia alone is the complete cause of this pattern of developmental difficulties found in a child with Down syndrome, it is probable that it has some part to play. Osteopathic treatment may be used effectively to reduce hypoxia, by offering a safe, non invasive and effective means of maximising and maintaining an open airway.

In the mid 20th century, osteopathic physician William Sutherland suggested that the bones of the skull and face were flexible, allowing some movement against each other; later, Retzlaff & Mitchell demonstrated that the joints between the bones of the skull and face contain connective tissue, blood vessels and nerves; and Dr Viola Frymann(who  Dr Centers studied under) later demonstrated that the cranial bones do move. This movement, or reduced movement, of these bones, especially the cranial base, can be detected and gently manipulated by an osteopath whom is adequately trained in Sutherland’s development of osteopathic medicine. This form of treatment is referred to as cranial osteopathy.

At the Integrative Hope Center we use a combination of nutritional intervention, Homeopathic and Naturopathic Interventions, Advanced Biomedical and Bioreasonance testing, and Reflex Integration Therapy to help children. Homeopathic Osteopathic treatment treatment is tailored individually to the needs of each child. It is likely that a child with Down Syndrome will require ten to 12 weekly osteopathic treatments at the onset of care to begin to normalize the structural findings. Once mobility begins to improve, the frequency of treatment can be reduced. Patents who come from far away with complex issue such as seizures are often treated intensely over several weeks. The benefits of treatment will be maintained by continuing osteopathic care periodically throughout the life of the individual. Generally speaking, the earlier treatment is initiated, the more dramatic are the structural changes and the improvement in functional abilities and health.